The integration of a continuously growing solar (PV) and wind energy share into our today’s and tomorrow’s industry sectors is one of the great challenges for sustainable societies.

For supplying water only (SYNWATER®) and both energy & water (SYNUTILITIES®) we design, develop and offer complete systems – powered by renewables.

Our European Industry Initiative (EII) - developing wind-powered seawater desalination as a floating technology - welcomes Fugro as globally acting partner for site-specific investigations. Together with Fugro the EII consists of 12 partners as follows: 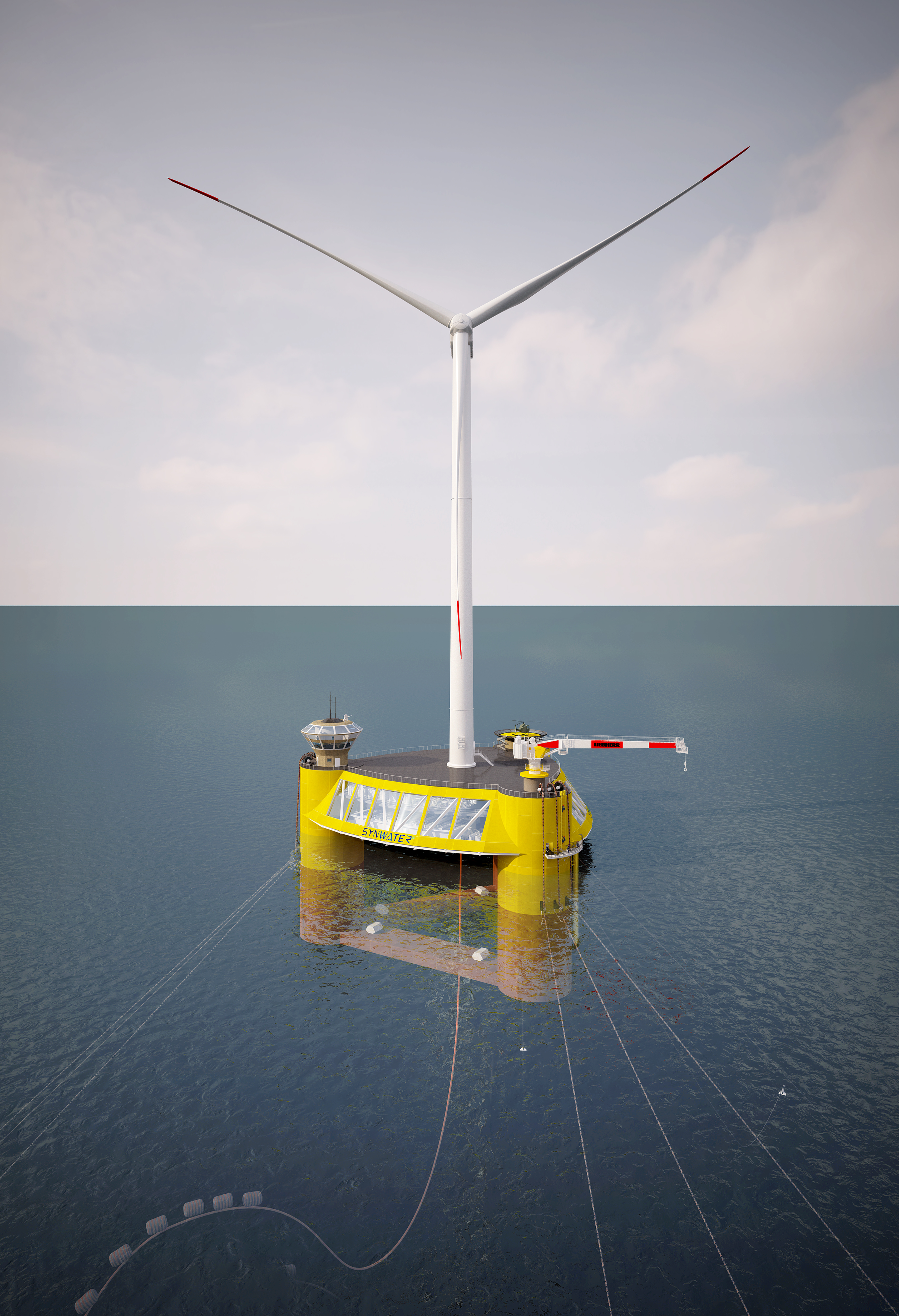 SYNLIFT has been contracted to conceptualize the energy & water supply for self-sufficient communities (SELCO) in coastal regions within windy and arid climate zones - worldwide. The SELCO concept is subdivided into three applications.

This contract encompasses communities in combination with large-scale agricultural and forestry settlements as well as smart cities for living and working in general (SELCO applications Agriculture & Forestation and Living & Working). 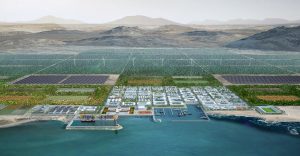 Both Saline Water Conversion Cooperation (SWCC) and SYNLIFT have signed a framework agreement to cooperate in Saudi Arabia regarding WINDdesal in general with the FWD reference project as a first cooperation activity included.
SWCC is a Saudi governmental institution mandated and entrusted with seawater desalination and the delivery of desalinated water to various regions of the Kingdom of Saudi Arabia and beyond. Referring to the desal capacities that SWCC operates itself or in cooperation with private partners, SWCC is one of the largest players in the global desal market.

2021, November, COP26, Namibia selects one of our clients as preferred bidder for a $9.4 billion green hydrogen project

During the World Climate Summit in Glasgow the government of Namibia announced HYPHEN Hydrogen Energy to be the preferred bidder for a large-scale wind-powered hydrogen project. SYNLIFT is the planning partner for the water supply in this project – see the September news hereunder.

SYNLIFT has been contracted to conceptualize the energy & water supply for self-sufficient communities (SELCO) in coastal regions within windy and arid climate zones - worldwide. The SELCO concept is subdivided into three applications.

SYNLIFT has been contracted to conceptualize the water supply for a large-scale project of wind-powered hydrogen production in Southwest Africa, based upon a flexible RO technology to be integrated as a deferrable load into the superordinated energy & load management. 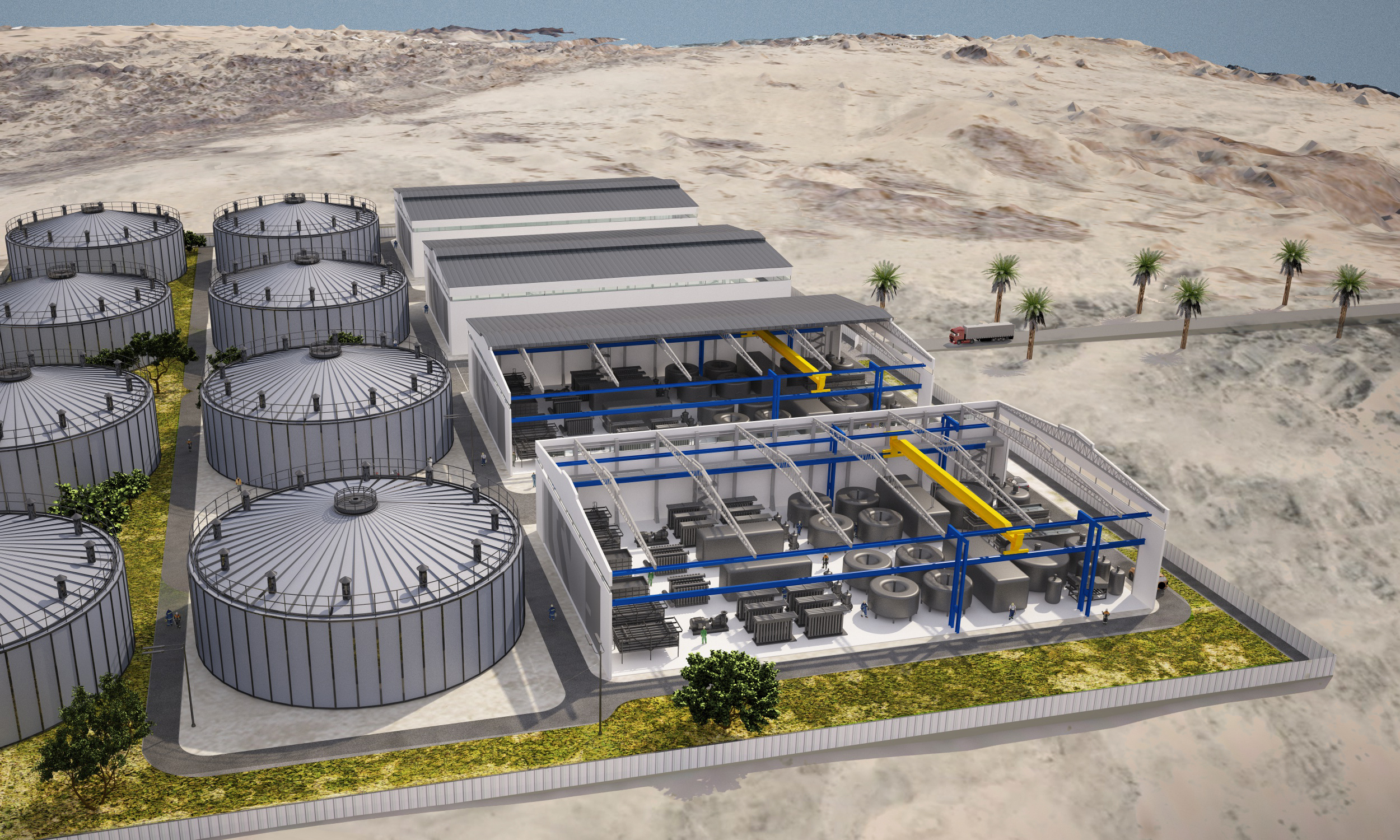 2021, July, SYNWATER®/WINDdesal – Proposal for large-scale projects handed over to PROINVERSIÓN/Peru

SYNLIFT, together with technology and financing partners, submitted a comprehensive proposal for the realization of wind-powered seawater desalination projects - incl. FWD options - for the provinces of Paita, Talara and Lambayeque to the state institution PROINVERSIÓN in Peru.

International press release by SYNLIFT regarding Floating WINDdesal on 14/02/21 results in broad coverage of FWD in publications and online services of offshore and wind energy industries.

Tagesspiegel - one of the daily newspapers with the highest circulation in Germany – reports on the business activities of SYNLIFT on 05/02/21:

2020, December, SYNWATER®/Floating WINDdesal (FWD) – For the implementation of a demo plant in Saudi-Arabia the second stage of application has been passed

For the realization of a demonstration plant FWD 10,000 / 15,000 in Saudi Arabia, the full proposal for the state tendering process has been submitted by the local business partner NTCC. The world's largest player in the desalination market, the Saudi company SWCC, has expressed its interest in supporting the project as an off-taker.

SYNLIFT signs the first contract for the first project development step for a WINDdesal project in Peru for 10,000/15,000 m3/d. 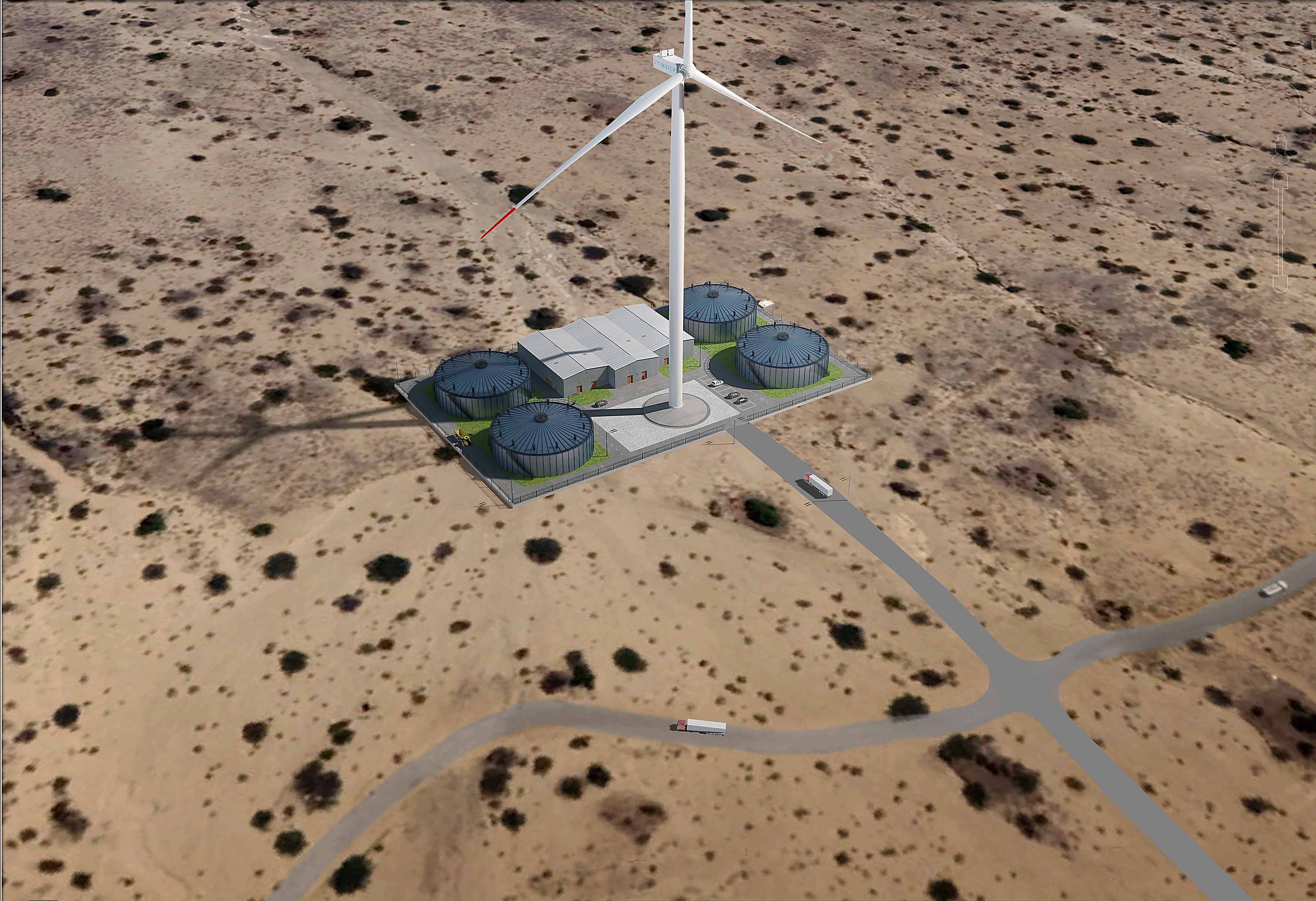 2020, September, SYNWATER®/Floating WINDdesal (FWD) – For the implementation of a demo plant in Saudi-Arabia the first stage of application was passed successfully

For the implementation of a FWD demonstration plant with 10,000 resp. 15,000 m3/d in Saudi Arabia, the first stage (concept paper) of a state tendering process was successfully passed.

SYNLIFT completes the work on the technology concept (phase 1) on behalf of and in cooperation with the FWD industry initiative.

An expert workshop on the topic of Energy Systems of the Future: System Integration, Flexibility and Value Creation will take place on 04/03/20 in Riyadh as part of the Saudi-German Energy Dialogue. The German Federal Ministry of Economic Affairs and Energy has invited SYNLIFT as a representative for the relevant area of seawater desalination.

Because of Corona the expert workshop has been cancelled at short notice.

Floating WINDdesal (FWD) is a wind-powered seawater desalination unit as a floating application for nearshore and offshore project sites.

FWD is designed for minimal water production costs, CO2 footprint as well as minimal impact on maritime and terrestrial environment.

With its high mobility potential, it targets to fulfill temporary supply tasks and should enable projects at locations, where conventional desalination could not be financed.

2019, November, SYNWATER®/REdesal -  The trade journal Erneuerbare Energien publishes a focus on desalination with renewable energies with  extensive reporting on the project activities of SYNLIFT

The bi-monthly Erneuerbare Energien is considered the leading trade magazine for wind, solar and bioenergy in the German-speaking area and is primarily aimed at investors, project developers, municipal utilities and energy providers. In the 07/2019 edition (pp. 16-21), an article about solar and wind powered seawater desalination was published under the title Jeder Tropfen zählt (Every drop counts), which reports in detail on current REdesal activities of SYNLIFT.

2019, Juli, SYNWATER®/REdesal -  Start of the industry initiative for the development and market launch of a mobile REdesal technology for medium and large capacities

With signing of a memorandum of understanding with the first tec partner, the partnership within the industrial initiative began in summer 2019.

2019, February, SYNWATER®/REdesal -  Preparation for an industry initiative within the desal sector

The goal is to implement the development and market launch of a mobile REdesal technology for temporary and permanent supply tasks together with manufacturers of key components, providers of relevant services (tec partners) and plant engineering companies (system partners). For this purpose, preliminary talks with potential partners were started from 02/2019 on.

Our Managing Partner Joachim Käufler participated as a panelist at the Water/Tech for Good Forum as part of the World Future Energy Summit WFES 2019, Abu Dhabi.

"What answers can the water industry give to upcoming extreme cases" was a central panel question. With regard to this topic Joachim presented requirements for a mobile REdesal unit for medium and large capacities. 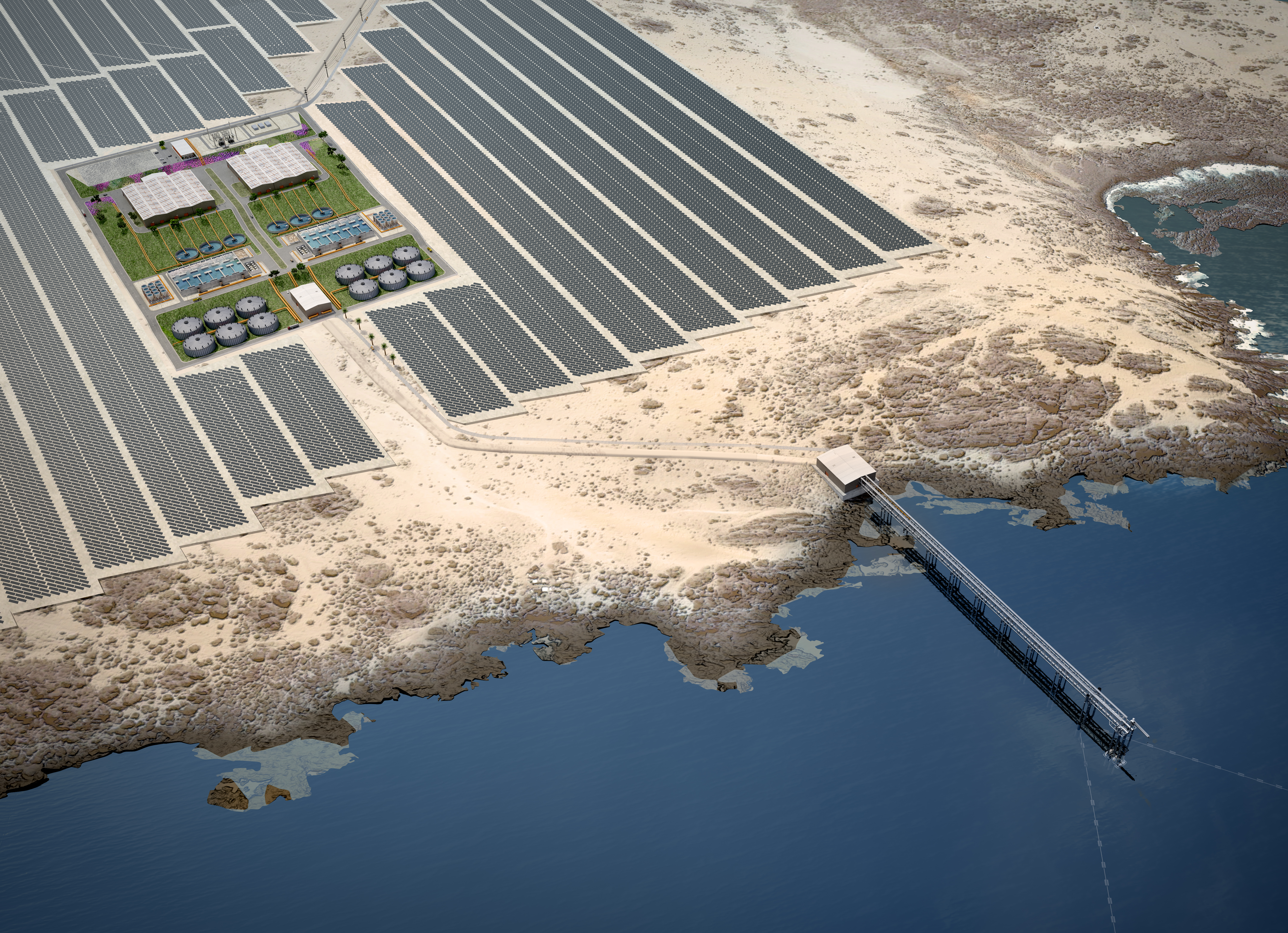 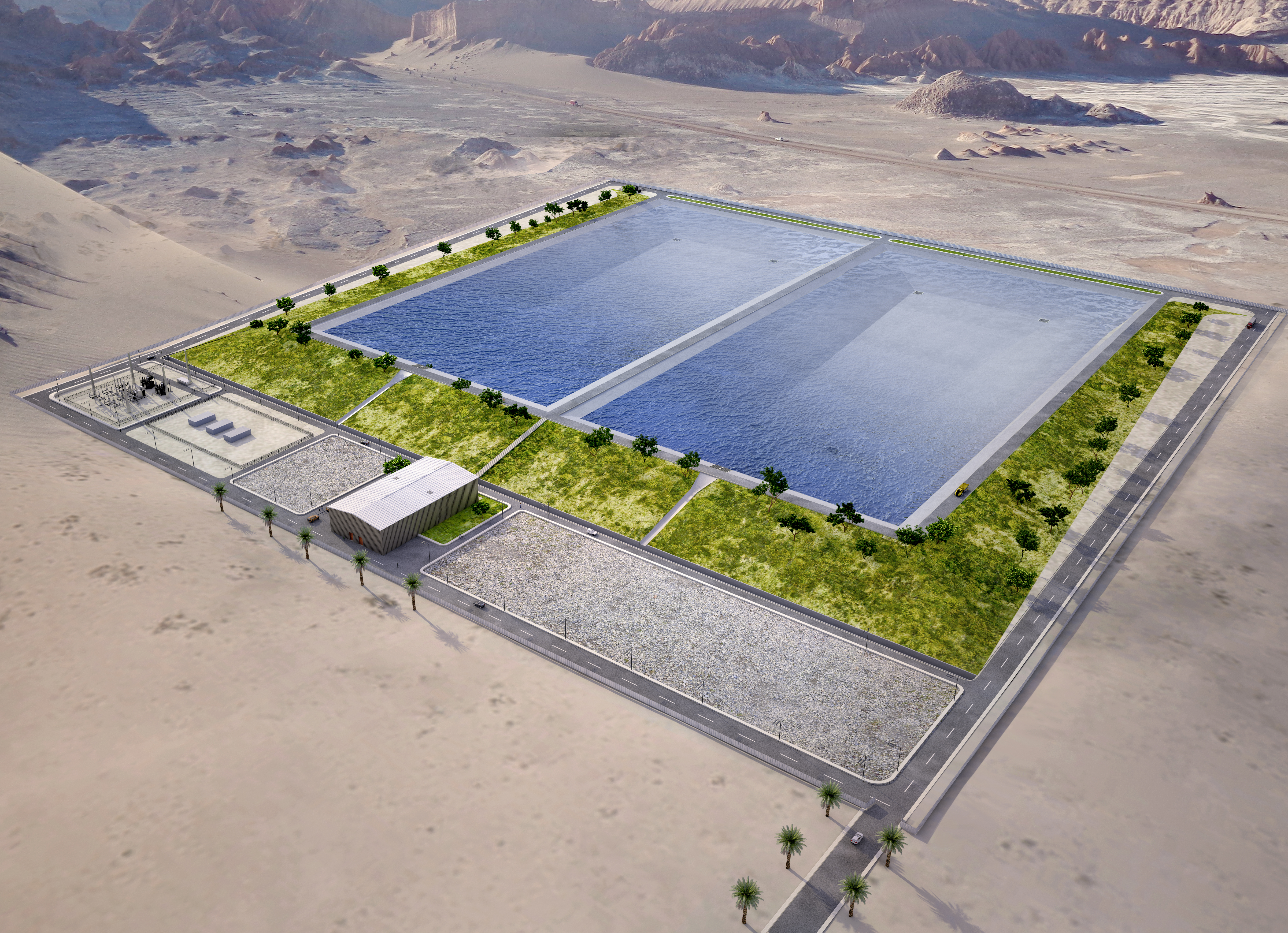 SYNLIFT has been contracted by Trends Industrial S.A. - a member of the Chilean Trends Group - to work out the complete technical concept and based upon that to realize the front-end engineering design (FEED) as general technical planner for a large-scale solar powered seawater desalination and water conveying system in Atacama region/Chile.